If you’re a Dutch language learner, and you’re at the beginner or intermediate level, you’re probably wondering, how long does it take to learn Dutch?

Some people say that it could take a few months, while others say it can take several years. So how long does it really take to learn Dutch?

It’s a good question to answer because no matter what stage you are in learning Dutch, you’ll want to be able to set realistic goals and expectations of the time and effort it actually takes to learn Dutch.

Understand the Goal of Learning Dutch

In order to answer how long it takes to learn Dutch, it’s important to first define what it really means to “learn the language” so that we can know what is the ultimate goal. From there, we can work our way backwards from that goal.

When we have clarity on what it means to actually learn the language of Dutch, then we can use this defined goal as our starting point.

Reaching a level of Dutch where you are able to comprehend and speak fluently in Dutch is where we all want to be. Essentially we want to be able to read, speak, write and listen to Dutch at a comfortable level. But how do we measure and define that level of Dutch fluency?

Therefore for the purpose of this article, the B2 level is the goal for determining the time-frame to figure out how long it takes to learn Dutch.

Of course, once you reach the B2 level, it doesn’t mean that you are totally proficient in Dutch and have mastered it. The B2 fluency level is just another milestone in the journey of learning Dutch. But, the B2 level is the best goal to aim for and to use for the purposes of answering how long it will take to learn Dutch.

Calculating How Long It Takes to Learn Dutch

Before we get into describing and explaining these two measures, it’s important to note that these measures give just an estimate of the time it takes to learn Dutch. The measures are based on research, and the results depended on the specific participants and learners involved.

But your case is going to be unique because at the end of the day, how long it takes for you to learn Dutch will depend on a range of personal factors.  These factors include your own availability of time, and your aptitude to learn, your motivations, your skills, your experience learning other languages in the past, how relevant and connected the Dutch language is to your native language, and more. But assuming you are a native English speaker, then the following time estimates will be more relevant to you.

Firstly, let’s go through the Foreign Service Institute (FSI) estimates for the time to learn Dutch. The Foreign Service Institute is part of the US government and it’s the institute that helps teach foreign languages to American diplomats and employees involved in the Foreign Service of the United States. Their aim really is to help American government employees learn languages to represent America and professionally work around the globe. Therefore it’s important to be able to learn specific languages fast and well. So FSI offer a number of courses to their foreign service.

See also  Best Way to Learn Dutch According to Research

For Dutch, it is a language that is from the Romance family of languages, which has roots in Latin. So Dutch has a similar language family and roots as the English language. This means that English and Dutch have a lot of similar structures, alphabet, letters, sounds, and etymology or words.

As a result, there are many cognates, or similar-sounding words and similarly-spelled words, between English and Dutch. Therefore, this makes it much easier for native English speakers to learn Dutch as compared to learning the more difficult languages like Chinese and Japanese.

According to the Foreign Service Institute, the Dutch language is placed at a level one difficulty. Level one FSI languages will take around 30 weeks to learn. If we assume that each month has about four weeks on average and then we divide the 30 weeks into four weeks per month, that means it will take around seven and a half months at least to reach the B2 level according to FSI.

This is a good starting point to determine how long it takes to learn Dutch. But it’s not clear enough.

We need to go deeper and understand how many hours does it actually take per day, out of those 24 weeks to actually learn Dutch? Is it really practical for us?

FSI actually refers to those 24 weeks as being around 600 to a maximum 750 hours within that time to reach the B2 level of Dutch or minimum professional proficiency.

If you want to reach this level within the FSI suggestion of 24 weeks, how many hours does that actually mean per day?

Now if we look at the fact that, each week has seven days and if we times 24 weeks by seven days, that gives us 168 days. Then if we do divide the 750 hours by the 168 days, you should be studying approximately 4 hours and 46 minutes per day within those seven and a half months in order to reach the B2 level.

This is useful if you actually have at least 4 hours and 46 minutes per day for 168 days to study Dutch. But if you only have one hour per day available then it will take you 750 days (2 years) to reach a B2 level of Dutch.

Similarly, if you just have 30 minutes a day using the FSI data and table, it should take you up to 1500 days (4 years and 1 month) to learn Dutch at the B2 level.

Another way to figure out how much time it takes to learn Dutch is to look at the amount of words you need to learn to reach B2 level.

According to research by James Milton at Swansea University, it takes about 2000 to 3000 words of Dutch in order to reach the B2 fluency level. For the purpose of this article, let’s use the higher limit of 3000 words.

You can also set the amount of new words you want to learn everyday. This will depend on the amount of time you have to study your cards. Ultimately, this will affect the total time it will take for you to learn Dutch.

Remember that you’re still going to have to learn grammar and other aspects of the language. So these vocabulary-based time estimates are certainly just a guide. However, these time calculations are still a great way to give you a better understanding about the time it will take to learn the vocabulary necessary to reach the Dutch B2 level.

The Bottom Line for How Long it Takes to Learn Dutch

In conclusion, it is going to take some time and effort to learn Dutch regardless of the method you use to figure out how long does it take to learn Dutch. The more available hours that you personally have per day will certainly boost and speed up the process of learning Dutch. But when we look at the FSI estimates and the vocabulary word estimates to reach the B2 Dutch level, it looks like it will take a couple of months to maybe even a few years to reach Dutch at a fluent level. 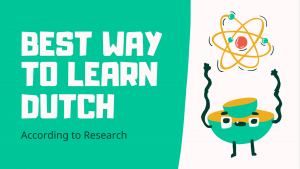 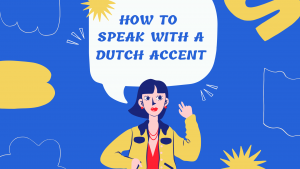 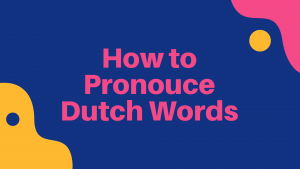 How to Pronounce Dutch Words Although the Dutch language is similar to English in some respects, many Dutch learners still Read more 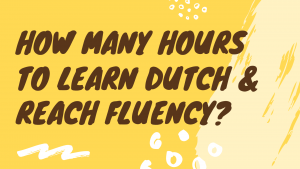